HISTORY OF THE BEAMSVILLE FAIR

– Half mile track installed on the fairgrounds

– Land sold to the Town of Beamsville for $1.00 to provide for the Centennial Arena

– 150th Anniversary celebrations, including return of the parade

Agricultural Societies were originally encouraged in Ontario as a means of providing a forum where farmers could meet to argue technical agricultural questions. Since very few people read periodicals to gain information, the agricultural society met to discuss crop rotation, livestock improvement, the need for under draining and the difficulties of wheat pro­duction in this area. By 1872, fruit and root crops were taking on prominence in Lincoln County, while the grains declined in major production.

At the turn of the century, the Union Show and Fair was one of thirteen fairs in Lincoln County. It was hosted by the Louth, Clinton, North Grimsby and South Grimsby Agricul­tural Societies at Beamsville and ran for two days in early October.

By 1917, the Beamsville Fair had been moved back to late September by the Clinton and Louth Agricultural Societies. A “B” show, it boasted trials of speed; carriage, general purpose, roadster and heavy horse classes; classes for five kinds of cattle; six kinds of sheep; four kinds of swine and four varieties of poultry as well as classes for fruits, vegetables, grains and a myriad of ladies’ fine needlework.

Over the years, the dreams of our forefathers, as reported in 1872, that the importance of infusing pureblood livestock be recognized by the farmers of the county, have certainly come true. This is shown by the lively competition today in all phases of livestock exhibition.

Centennial gates marked the One Hundredth Birthday of the Fair held at Beamsville and a centennial project, in the form of a 200′ x 90′ arena, added to the available display areas. The Lincoln County Fair is one of two remaining fairs in Lincoln County.

It is eagerly anticipated by everyone, from young school children who compete in many creative classes, to the rural and urban folk who participate in and learn from the many fine exhibits to be encountered at the Fair.

… not to mention the horse racing.

This house sits on property that was originally granted by the Crown to Samuel Corwin in 1803. His wife was Anna Beam, daughter to Loyalist pioneer Jacob Beam. Her brother, Jacob Beam Jr, built the house some time between 1852 and 1855.

It was sold to carriage maker James D.Bennett in 1870 and then later resold to his son-in-law William Fairbrother in 1895.

The frame house is an early version of the Gothic Revival style, most probably inspired by plans found in Brown’s “The Carpenter’s Assistant”, a book published in 1851. Notable features are sharply pitched gabled roofs and carved finials with cut-out quatrefoils worked into the bargeboard on both the front facade and east wing. A simple, square-columned veranda covers the south-east enclave and front door which has a paned transom and sidelights. The tops of the slender, but widely framed windows are surrounded with shaped lintels and decorative keystones. 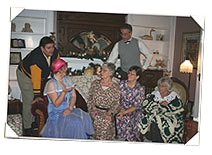 The Davis family reunites at the old family home in Beamsville in preparation to attend the Fair. Excitement builds as they await the arrival of a beloved son/nephew who has been away at college in New York and his new girl friend, who they understand to be a real ‘sweet young thing’.

Built in 1871, the spacious white frame home was presented by Jacob Kitchen of Grimsby to his daughter Martha on her marriage to David Davis of Jordan. From a solid Loyalist family, Davis was a magistrate, Justice of the Peace and an elected Reeve of the village on six occasions.

The Davis house was home to three generations of the family and became a tourist boarding house during the Depression. Davis was a carpenter and landowner but he concerned himself so deeply in politics that he had less and less time for carpentry and no inclination to work his land.

It was bought in the 1930’s by Dr. Harry Granger, who ran his medical practice there until 1940. That’s when a young, single physician from Grimsby, Dr. Harold Latham, took over both house and medical practice. In 1941, he married Elva Coward, a Grimsby public school teacher, who assisted him in organizing his work and handling the phone.

Jeny has been coming to the Beamsville Fair for over 40 years. Each year she sits in exactly the same place as if she was waiting for something … or someone. Really makes a person wonder what that’s all about …

In 1945 Margaret and Dr. Charles Wray bought the house from the Armstrong family. It had previously been owned by the Kellys. It is a red brick home in the Gothic Revival style with lots of wonderful gingerbread. Dr. Charles was Beamsville’s only dentist at the time. The purchase price was five thousand dollars and together with Margaret’s dad, undertook major redecoration and renovations of the home.

Charles and Margaret were both members of many groups in Beamsville and area so many parties and teas were held at the house. The rooms were so large that there was always room for everyone. 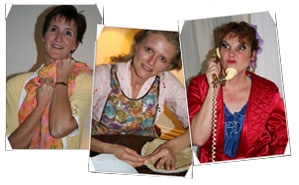 Do you remember the old party line phones? Here’s what happens when one person on a party line gets just a little too curious about what her neighbours are talking about.

Though records are scanty, the United Church progressed during its first 28 years after 1840. J.B. Osborne, one of Beamsville’s leading figures of the day, gave a building site at the corner of King and William Streets as the location for a new church, indicting the growth of the congregation. Trinity United Church now stands on this site.

In 1881 -1882, a fine manse was erected with Mr. W.S. Tinlin as the contractor. The cost of the building as per the contractor’s estimate of $3,353, was shared in proportion by the Clinton congregation. Mr. Wm. Gibson was Chairman of the board at this time.

Today, this beautiful facility still plays an important part of the fabric of Beamsville as an available rental facility for meetings and events.

Even today, the secrets of family recipes are safely guarded and only passed down to direct family descendants.  For Sam and Martha the Fair is a time to bring three (or perhaps even four?) generations of family together.

In 1864 Jacob Kitchen built this home and presented it to his oldest daughter Maria when she married Cyrus Kilborn. Cyrus Kilborn was the first Reeve of Beamsville when it was incorporated as

In March of 1886, Cyrus Kilborn sold the home to the Whites for $2,500. The Whites sold to William Walker in May of 1891. William Walker died in April of 1892, leaving behind his wife Mary, 4 married daughters, and 3 children still at home ages 15, 12 and 6.  James D. Bennett, carriage maker, bought the property at a public auction in September 1894 for the large sum of $1,200. Mrs. Fairbrother (nee Iva Clara Bennett) bought it from the J. D. Bennett Estate in 1931 and bequeathed the property to George Terence Fairbrother. It was under Fairbrother’s ownership until the first of July, 1959, when the property was purchased by Arnoldus John Verster and Alida Verster for the sum of $17,024.52.

After your tour, stop in for a strong cup of tea and some old- fashioned prize-winning desserts from the annals of the Lincoln County Fair.

ingredients. As always, local volunteer bakers participated in creating these scrumptious delights to warm your hearts and tummies!

Recipes are available in Misses Nettie & Nan’s own cookbook. You’ll find the cookbook available in the tearoom along with fresh baked goods to take home and chances to win some great prizes. 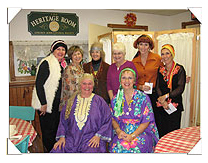