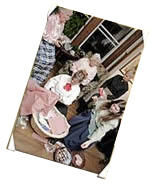 When there is to be a wedding, there will be a quilting bee, and when a group of local women get together for any length of time you can only guess at what they can find to talk about.

The idea for a Women’s Institute, like many other national and international associations, was born from one person’s personal tragedy and the vision of other like-minded people.

The Erland Lee Museum in Stoney Creek will give you the history of the Women’s Institute. This play will reach to a place within you, beyond the facts.

The arrival of the train, a relatively new phenomena in these parts, is always a cause for excitement. Join a few of the locals at the train station and find out how the railroad is affecting everyone’s life.

How did May Tyser Drury come to be living in a small, rural Canadian setting like Bridgeport after having had the nerve to marry one of her father’s servants, a stable groom? Imagine!

May’s father owned a prosperous shipping company and could afford to send his disgraced daughter off to Canada with the ‘stable boy husband’, complete with a constant supply of money from her shares in the shipping company. Come on in and see the results!

When there is smoke there’s usually fire and this case is no exception. The long smoldering fire is between the British boatmen and the Irish rail workers; the blaze caused the tail terminal to burn to the ground last night.

Join us at Gould’s Saloon as the tensions rise and listen to some of the complaining and blaming that we unfortunately hear all too often, even now in 1899!